Dedicated Graphics Card – Is it Necessary?

Graphics card is a computer hardware that is responsible for processing computer graphics. It is vital specially if you’re doing some editing stuff e.g., photo editing, video editing, rendering, and computer gaming. It’s available in different categories such as entry level which are the most cheapest cards but more powerful than built-in graphics such as Intel HD graphics. There are also low-profile graphics cards, which are compact, affordable, yet powerful. There is also mid-range graphics which is way more powerful than entry level cards with higher price point and lastly the most expensive high-end graphics card such as the GTX 1080 used by hard core gamers and professional video editors last 2016. I doubt there is a high end low profile gpu because most of the high end cards are really bulky because of the much needed aluminum fins and double/triple cooling fans to dissipate heat from the graphics card itself.

In the past graphics card or what they call as video card is considered as optional peripheral, especially if you just use your computer for documents, simple chat, and browsing activities. Today GPU is vital for you to be able to catch up with the latest technology, as computer gaming became a trend and a lot of people used this as a stress removal after long hours of work. For professional graphics and video editors, they are willing to spend thousands of dollars for their computer graphics card as it will greatly help them with their work specially software that utilized graphics power such as AutoCAD, 3DSMAX, Photoshop, and other video editing/rendering software.

In this article I will review the best low profile gpu that are budget-friendly with decent processing power, enough for you to play games, do your editing work, and power-up your system.

What is a Low Profile Video Card?

Low profile video or graphics card is a kind of video card designed specifically for limited space computer systems that requires a very minimal space as the system case itself is too small or compact, thus the computer peripherals needed should be the lowest or smallest as it could be. All low profile gpu or if not all, majority will only require to occupy a single bracket in the back i/o panel of your case to be installed. In addition, low-profile graphics gaming card are sometimes available without fans such as silent video card type with only a heatsink available to cool the gpu die. A good example of this is ASUS GT610 2GB, which is currently installed on one of my computer system. It comes with the basic output connectors such as VGA for older compatible monitors, DVI-D, and HDMI. Notice that it has only a single bracket design.

If you have noticed with the mid-range and high-end graphics card, they will consume two-brackets in the back of your case because of the extra space needed by the graphics card cooler and also of the number of ports the graphics card support (2 X DVI, HDMI, Display Port, VGA).

This card is definitely more powerful than a GT 630, GT 710 and even GT 730 GDDR5 variants.  It features a 2GB GDDR5 memory with a 5400MHz effective memory. It has a core clock of 1033MHz and a boost clock of 111MHz. Power consumption is very little as 60w and it requires atleast 400w of true rated PSU. In terms of connectivity outputs it comes with a 1 x DL-DVI, 1 x HDMI, 1 x DisplayPort, and VGA (with included adapter) with a capability of displaying output on 3 monitors simultaneously.

The GV-N75TOC-2GL is one of the most powerful card on its class because this card features 2GB of GDDR5 memory with 128-bit interface. It also comes with base clock of 1033MHz and boost clock of 1111MHz. This low profile GTX 750 ti graphics card supports PCI Express 3.0 X 16 bus interface and needs at least 400w of power supply.

This low profile entry graphics by MSI is one of the most energy efficient and capable of playing games that are power hungry using medium to high settings. The card features 2GB GDDR5 memory, Core clock of 1006MHz, 64-bit interface, Directx 12, 5000MHz effective memory speed, and supports PCI Express 2.0 x 16 . In terms of connectivity it has VGA, DVI-D Dual Link, HDMI. This graphics card only consumes 49W and requires at least 300watts true rated power supply to run smoothly.

This graphics card is a two-bracket low profile video card that can handle popular game titles in 2015 and I can say a good product to buy even this year 2016. The XFX R7 240 features a 780MHz core clock speed, Video Acceleration (DXVA), DirectX 11.2, supports up to 4096 x 2160 display resolution and requires at least 450watts True rated power supply to run smoothly. 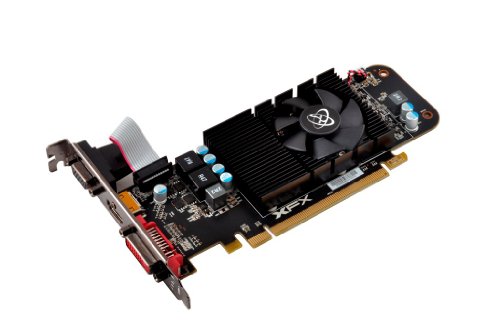 PNY is another reputable graphics card manufacturer, and their GT 730 is also a bang for the buck GPU. It has a 384 cuda cores, stock clock speeds of 902MHz, 64-memory interface, GDDR5 memory @5000MHz, with a TDP of only 38watts. This graphics card requires at least 300watts of power source or more to run stable in your system.

This manufacturer is my favorite not just because I love their orange theme, but also the overclocking capabilities of their medium to high-end range of graphics card. Zotac’s GT 730 has the same specs with other GT 730 models from other brands. I would like to emphasize that it comes with Hardware accelerated Blu-ray 3D playback, Advanced Dolby TrueHD and DTS-HD Audio lossless multi-channel HD audio bit streaming to have a balance superb audio and visuals. 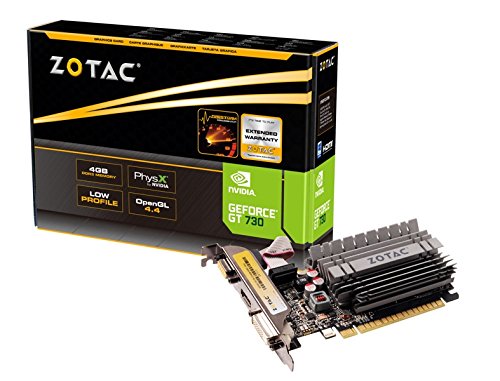 Play your favorite games in Full HD such as GTA V using this GTX 750 Ti graphics card from EVGA. Featuring a core clock of 1176MHZ and a boost clock of 1255MHZ will ensure that you can play most the AAA game titles in high settings. Other specs of this card include 5400MHZ effective memory, PCI-E 3.0, 128 memory bit width, 640 Pixel Pipelines, and DVI-I, HDMI, DisplayPort connectivity outputs.

These graphics card are the best, affordable, powerful cards available in 2015 up to 2017. I will update this post for the latest and more power efficient low-profile GPU that will come out this year 2017, so stay tune and enjoy shopping around for your first low-profile gpu.

Entry level graphics card are the one that you can buy in a cheap price and the gfx cards that are I can say the minimum requirement for the application or game you are  trying to run. The graphics card are indeed more powerful than the built-in graphics card installed on a computer system such as the Intel HD series for the Intel processors.

Mid entry level graphics card on the other hand are the hardware where you can play the games of today in high definition or high settings (recommended graphics card). These video cards have also double processing power than the entry levels, meaning you can do more by using these line-up in your work as it can finish the tasks that you need to be done much faster. These level of graphics card are twice or thrice the price of the entry-level but indeed are worth it.

High entry level or the highest end gpu are the ones that are way too powerful in terms of processing power but also power hungry. This area of improvement is the one being focus now by graphics manufacturing company such as Nvidia and AMD because in some countries especially here in the Philippines where the cost of electricity is higher so meaning you will definitely consume a lot of electricity when you will use these high end GPUs.